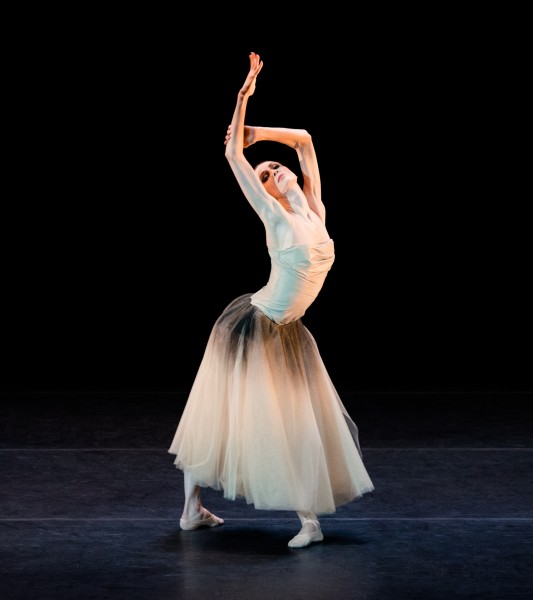 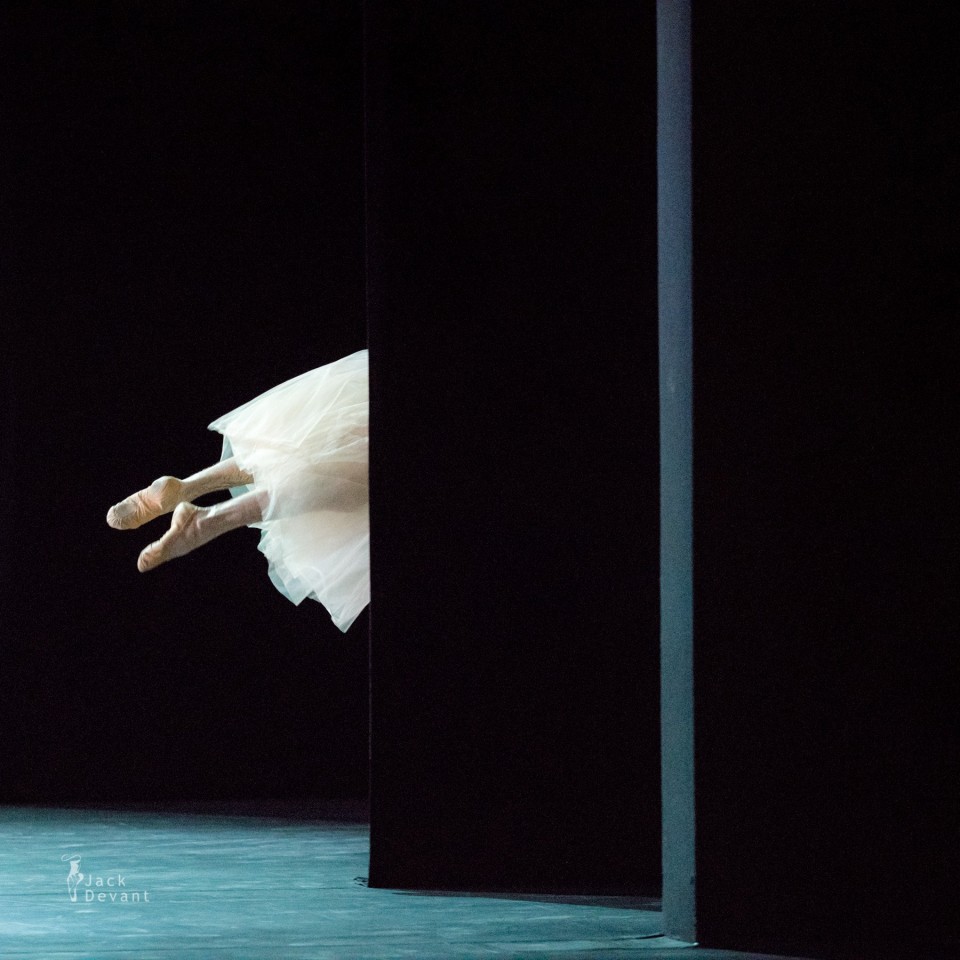 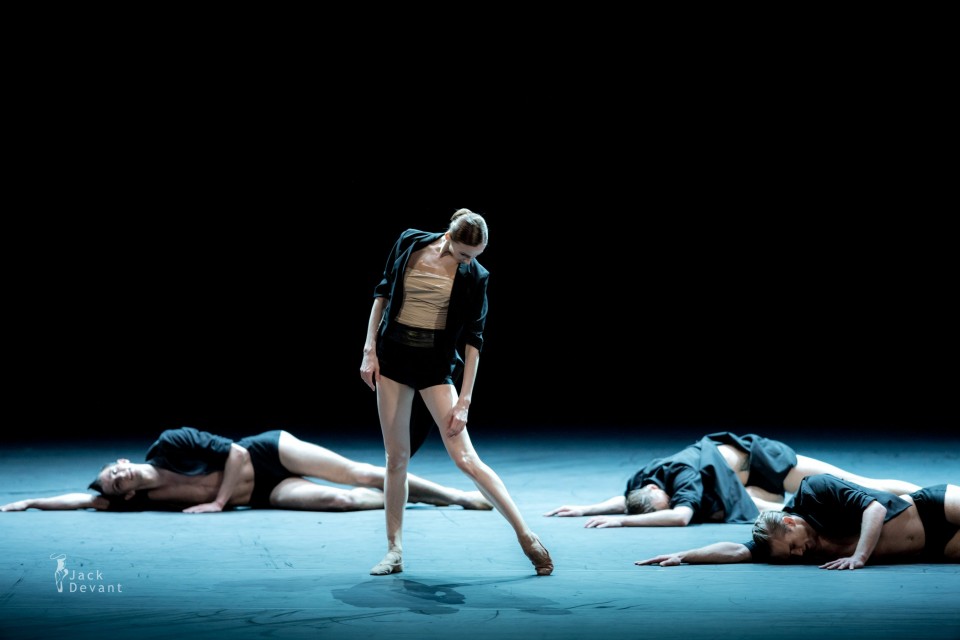 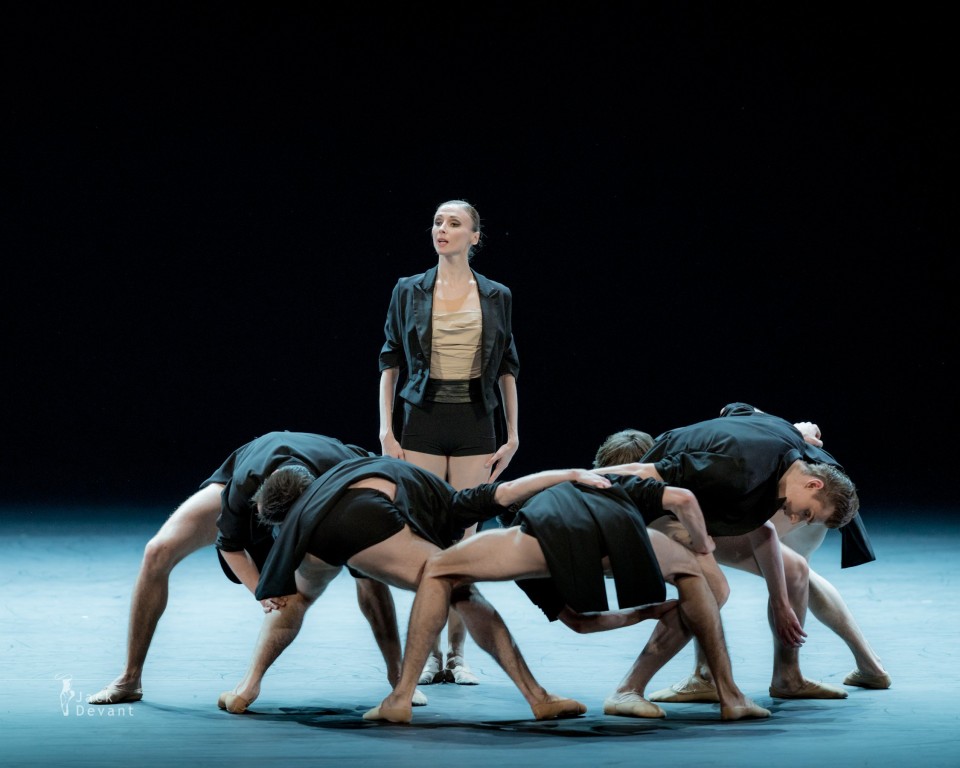 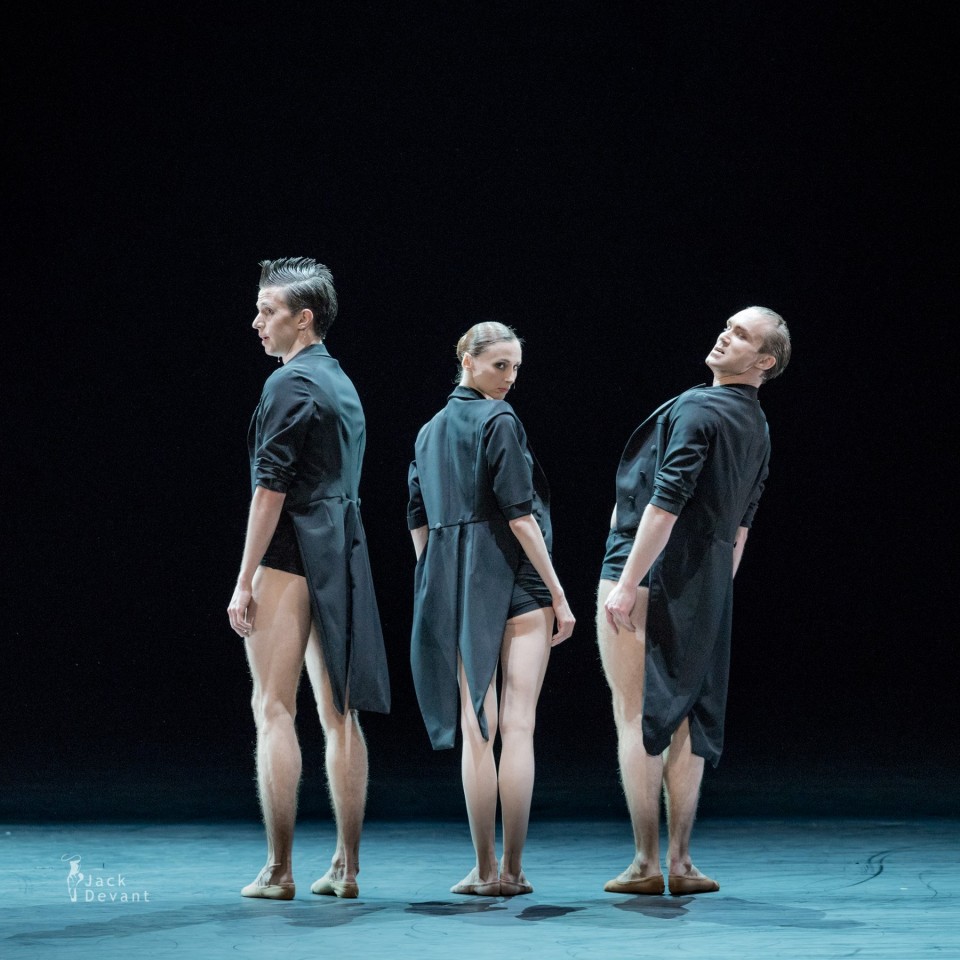 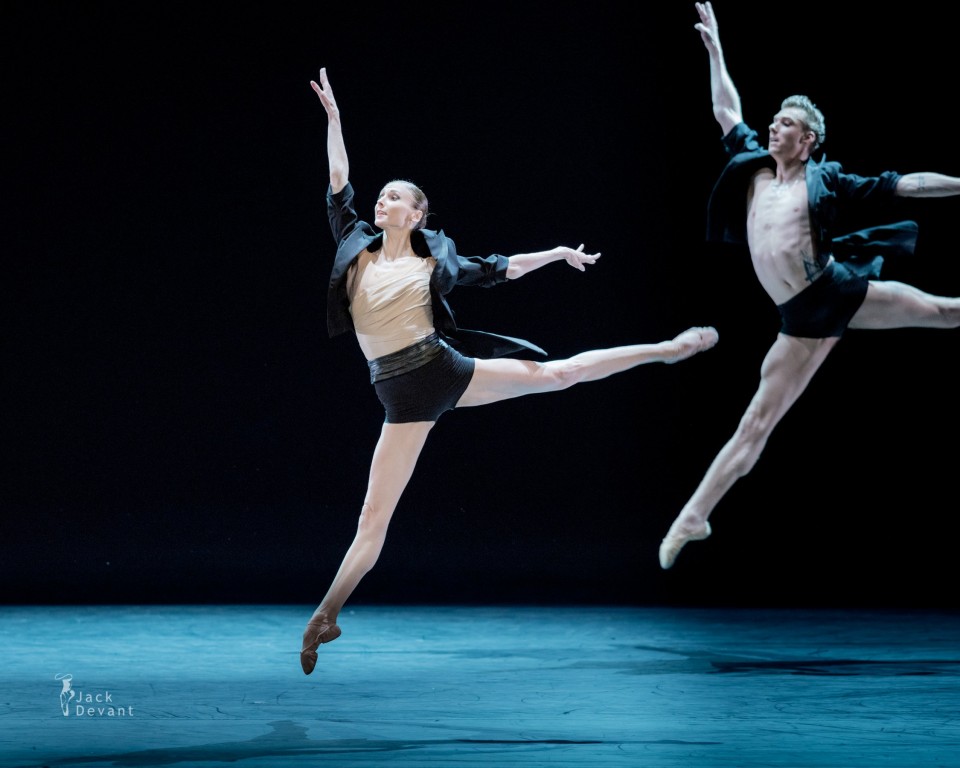 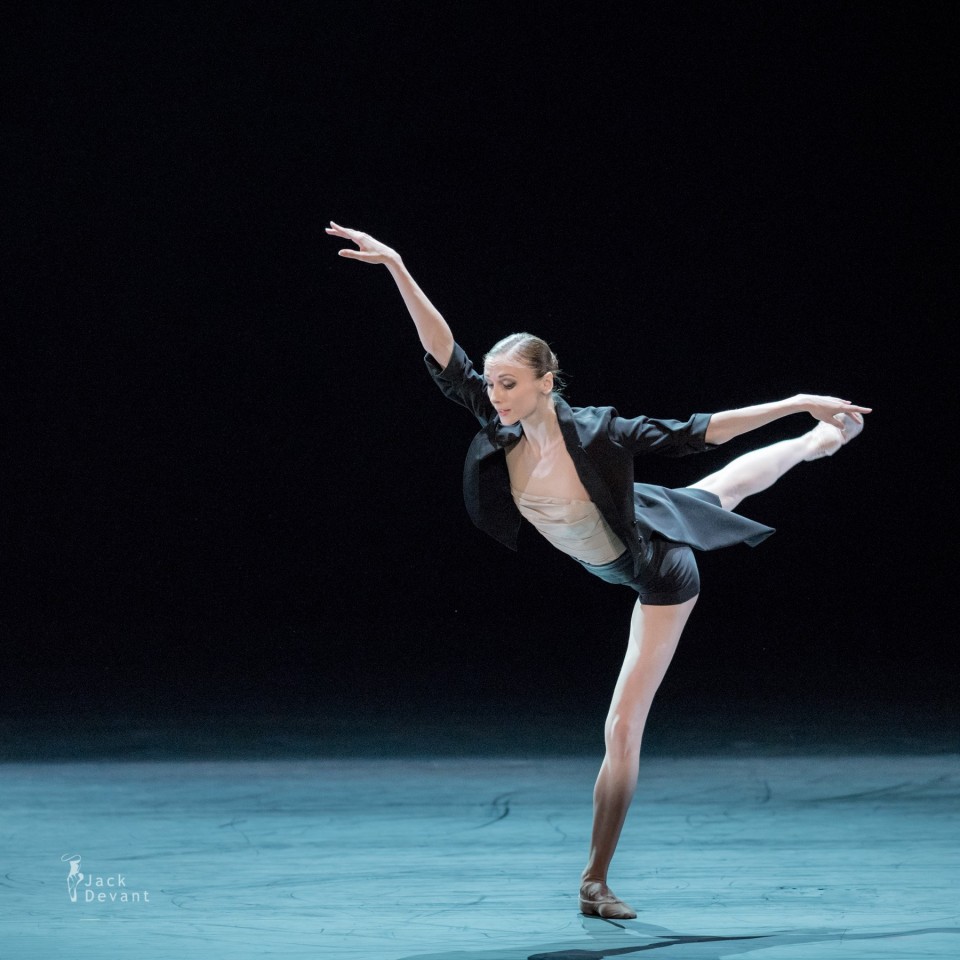 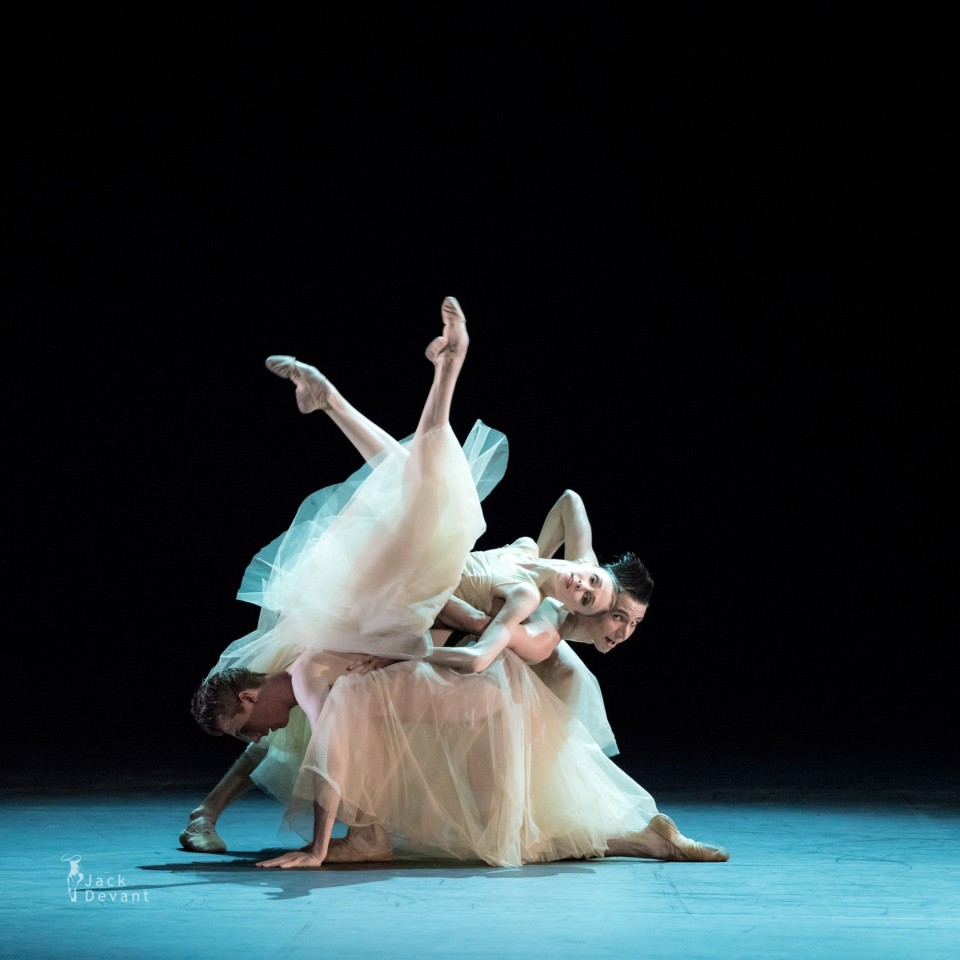 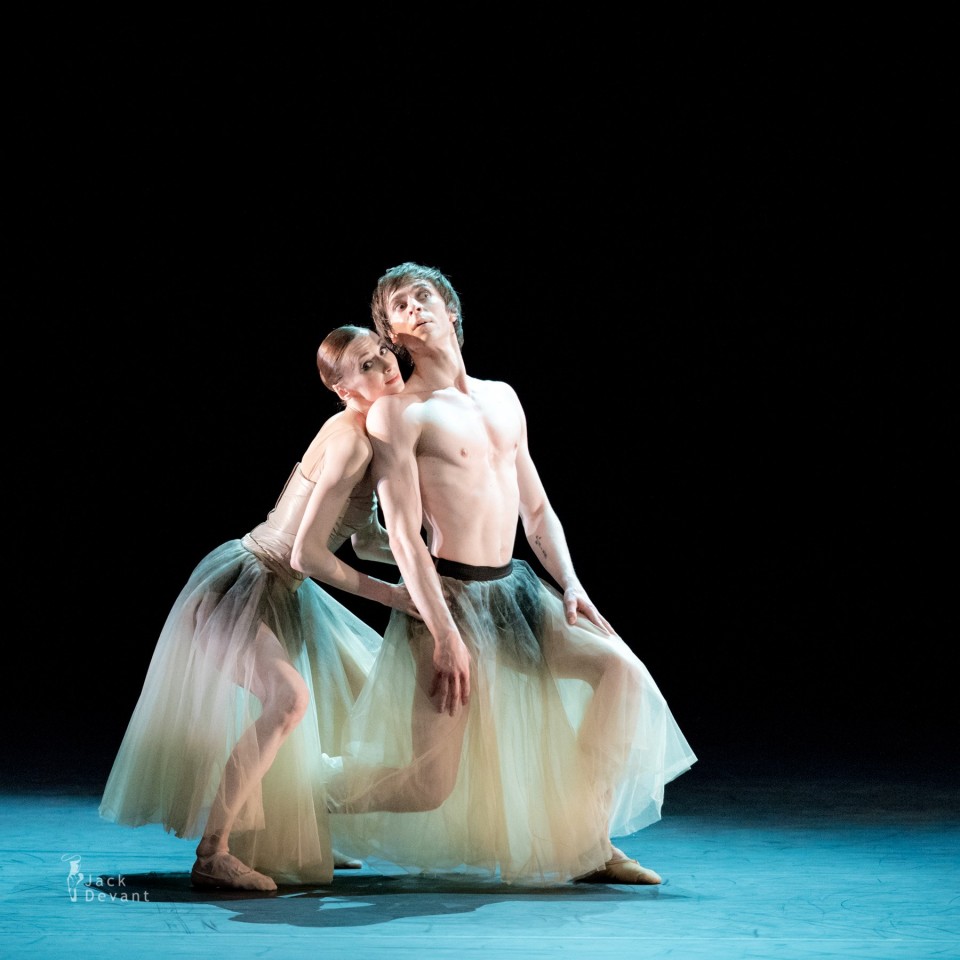 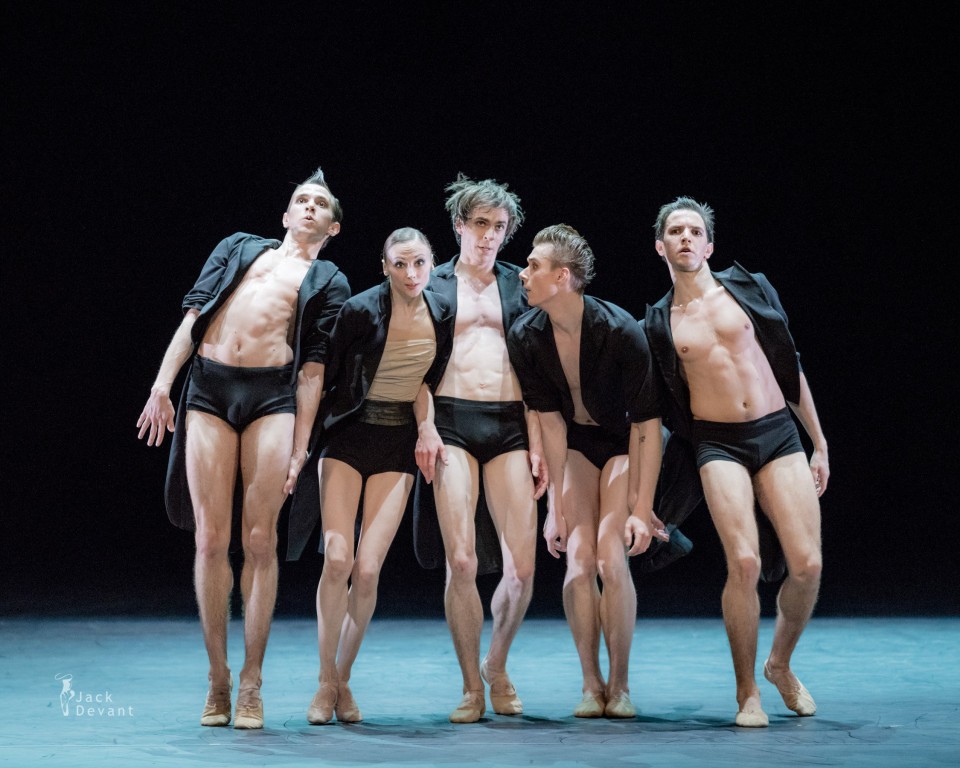 The final piece of the evening, Marguerite Donlon’s “Strokes Through the Tail,” easily won the personality award. No angst or drama here — just wit, humor and playfulness, suitably set to Mozart. It turns out this is a good fit for Zakharova: alternating between tutus and tailcoats, she orders her five male minions around, arranging them like so many notes on a composition page. Fun as this closing number was, what stood out most to me is that it didn’t put its star up on a pedestal, as the other pieces did. Instead, it allowed her to express her power and personality as a living, breathing human being — and not merely as a muse to be endlessly lifted and glorified. Perhaps it’s not a coincidence that it was choreographed by a woman. Getting this taste of Zakharova “the person” at the end made me realize what I’d been hungry for all along. Hopefully, there will be more of that on offer on the ballerina’s next menu. (Meghan Feeks, Huffington Post, 22.11.2017)

Strokes Through the Tail (…) is quirky and full of sass delivered by the charismatic male dancers of the Bolshoi; and it’s enjoyable to see so much personality and humour brought to the stage. They copy Zakharova by donning a selection of tail coats and grass skirts, while Marguerite Donlon’s choreography is loaded with slapstick and silliness that ends the evening in giddy spirits. (Vikki Vile, Culturewisper.com)

Strokes Through The Tail changes the mood completely with Marguerite Donlon foregrounding humour and slapstick in place of torment and turmoil. Venturing into territory long occupied by Les Ballets Trockadero de Monte Carlo, we get pratfalls, fourth wall-breaking and a lot of fun as the dancers relax without ever losing the precision at the heart of their classical technique. There’s a bit of cross-dressing, a lot of heavily muscled male flesh on show and even a bit of fighting – if Charlie Chaplin did ballet, this is what he would do. (Gary Naylor, Broadwayworld.com, 22.11.2017)

The best piece of the evening, Strokes Through the Tail, was by Marguerite Donlon – it played with Russian ballerina traditions by inverting them. Zakharova was naturally the centre of attention surrounded by 5 conductors/musicians/dancers in tail coats and, at times and rather incongruously, shorts. To some scrumptious Mozart, it’s really full-on physical contemporary movement (performed in ballet slippers), as they all interact playfully and funnily with limbs making oddly harmonious mischief. But after a while the roles invert and Zakharova gets her own back by donning the conductor garb and the hapless Bolshoi men (led by Lobukhin and Savin) become ballerinas, totally incapable of delivering the goods but honour bound to try. Ther’s depth here, and I’d really like to see it again. I first came across Donlan when she had her own company (Donlon Dance Company), based in Saarbrucken, and they were dancing at a Hamburg Ballet gala, not in a piece of hers but Parade – Massine’s 1917 legendary Ballets Russes work in designs by Picasso including a pantomime horse. I relay it to show some of the wide-ranging breadth of Donlon’s practice and it was an inspired commission that sent us all home happy. Happy for Zakharova who ultimately curated an interesting night, very happy to see her retinue of Bolshoi dancers and happy to see Donlon provide such final good cheer. (Bruce Marriott, DanceTabs.com, 24.11.2017)

The three faces of Amore presented by the sublime Svetlana Zakharova in her brand new triple bill are passion, ambiguity and playfulness. She is joined on stage by top Bolshoi male artists, including Mikhail Lobukhin, Denis Rodkin and Denis Savin. Live music will be provided by the Orchestra of English National Opera under the direction of Pavel Sorokin.

The evening opens with Yuri Possokhov’s masterpiece Francesca da Rimini. Set to Tchaikovsky’s symphonic poem, it tells the story of the tragic lovers from Dante’s Inferno condemned to eternal punishment.

Rain before it falls, choreographed by Patrick de Bana is a ballet which concerns the struggle with the choice between darkness and light. It is set to classical sounds by Bach and Respighi decorated with modern electronic music tapestry by Pina-Quintana.

The third piece features Svetlana Zakharova supported by five male dancers. Set to Mozart’s Symphony No.40, Strokes Through the Tail is a humorous piece choreographed by Marguerite Donlon, providing the perfect ending to the evening. Part of the fun is costumes by fashion designer Igor Chapurin who also created the costumes for the unforgettable Francesca.

“I love the challenge of creating something different, unpredictable. That’s why I came up with the idea of making a big project where I could perform different types of choreography in three distinct ballets.  I’ve called the programme Amore because all three ballets are about aspects of love and love is present in all of the performances and as an international project the word ‘amore’ really needs no translation.” (Svetlana Zakharova)