DDC for Theater für Niedersachsen
Worldpremiere, So, 01.11.2020, Halle 39
For further dates, see the link below
https://www.tfn-online.de/spielplan/tanz

STROKES THROUGH THE TAIL

Special event…. to be announced 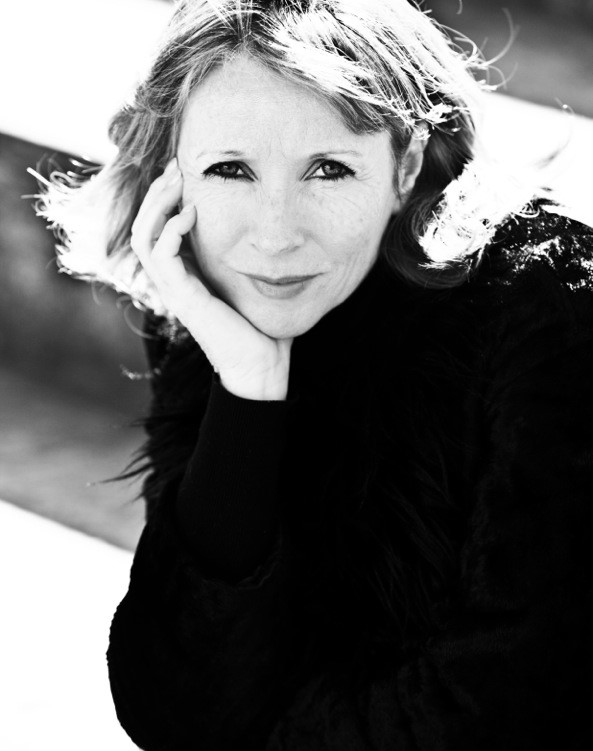 Marguerite Donlon is a renowned, innovative, contemporary choreographer and Dance director based in Berlin with the Donlon Dance Collective and Theater Hagen as the Ballet Director and house choreographer. After an exciting career as a dancer in London and Berlin working with choreographers such as William Forsythe, Jiri Kylian, Meg Stuart and Maurice Bejart she became a choreographer and is now at home with her own unique creations. Her work can be seen on major international stages such as The Bolshoi Theater, Moscow, The Collisium, London, Deutsche Oper Berlin and Sadlers Well London but also in many other Theaters in Germany. Marguerite has received many acknowledgements for her creative work among them the Saarland Medal of Merit, a nomination for “Die Faust” and “Prix Benois de la Danse” and a Civic Reception by the Longford County Council, Ireland. In addition to her dance work, in 2014 she became an accredited PCT and RD1st Business Coach and Leadership Mentor. On her live zoom masterclass, she will talk about the world of choreography: what it’s like to start a creation from a blank canvas. The importance of following flow and building trust within the creative team so as to step out of the comfort zone. She will share how to recognise a mistake or a misunderstanding as a possible chance or opportunity to find new ways. How to devise choreographic tools to help break habits and knowing when to let go and allow the dancer to take ownership. There will be time to ask questions and discuss specific points. She will also talk about the importance of building up a network and finding the courage to follow ones own unique voice.
Applicants are invited to submit questions prior to the zoom masterclass. 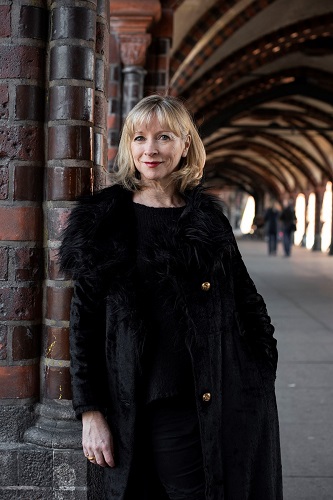 Marguerite Donlon to be the new Dance Director for Theatre Osnabrück

I am happy to announce that I will join the newly designated Intendant Ulrich Mokrusch to be the new dance director for Theater Osnabrück from 2021/22.
It has been such a joy to brainstorm and create new ideas together with leading team, Juliane Piontek, Andreas Hotz, Norbet Schmittberg, Christian Schlüter, Claudia Lowin, Tanja Springer, Matthias Köhn and my longtime assistant and artistic collaborator Francesco Vecchione.
I’m excited to bring new and old dancers together to find inspiring and unique ways in dance and I look forward to opening many new doors in and outside of our new Theater.
Marguerite Donlon
Oct: 2020 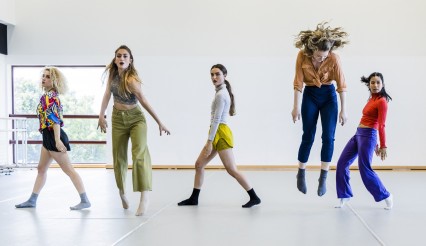 Step Up 2020, Dance Limerick
Deadline extended to 17th April, auditions to be held in mid June, date TBC.
Step Up Dance Project 2020 continues to bridge the gap between dance education and professional contemporary dance practice. Step Up is curated by Irish born, Marguerite Donlon, International choreographer.Step Up aims to enhance young dancers’ professional networks, by connecting them to the Irish and international contemporary dance community, thereby improving professional opportunities for young dancers in Ireland and abroad. The eight-week programme is open to dancers who have completed their professional training within the last three years and participants will be selected via audition on 10 April.
Please see link for further details….
https://dancelimerick.ie/news/step-2020-applications-open 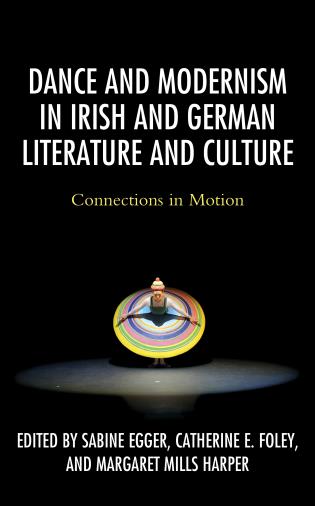 My first published chapter “Somewhere Between Remembering and Forgetting” in Dance and Modernism in Irish and German Literature and Culture, edited by Sabine Egger, Catherine Foley, and Margaret Mills Harper, has been published by Lexington Books. It is an examination of the choreographic process for a creation I made for Stuttgart Ballet. It deals with how I was inspired by the poem “The Man Made of Rain” by Brendan Kennelly. This publication came out of a multi-disciplinary conference I spoke at in University of Limerick in November 2016, entitled “Irish-German Connections in Motion”. The book features lots of fascinating contributions by top-notch academics and practitioners, check it out here:
https://rowman.com

TO THE MOON AND BACK [Der Rest ist Tanz] 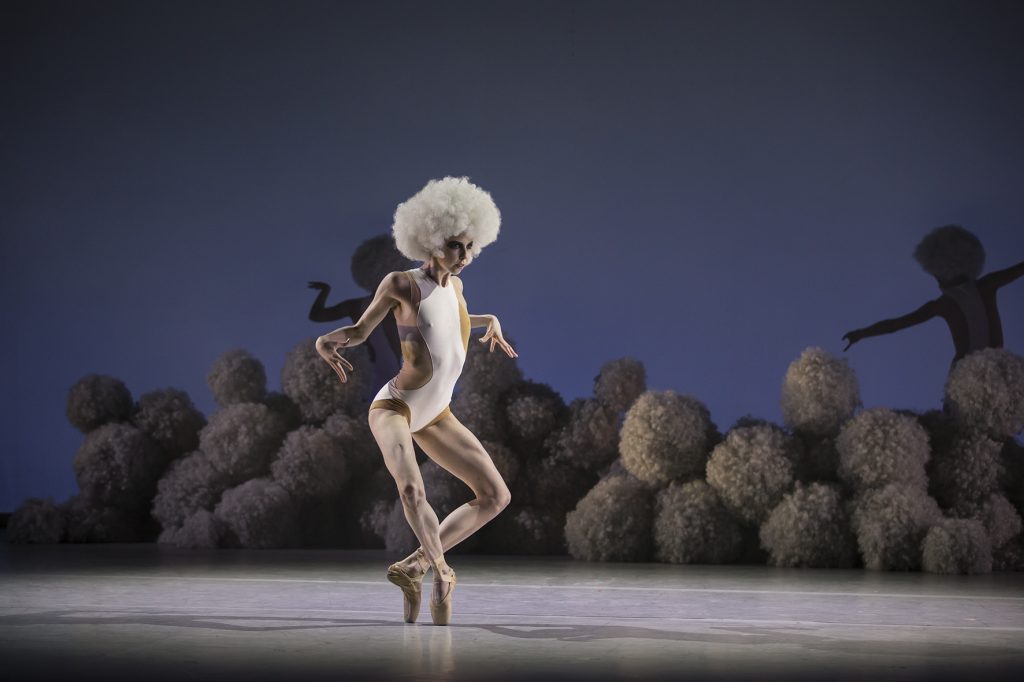 To the moon and back. Choreographer: Marguerite Donlon. Dancer: Bridgett Zehr 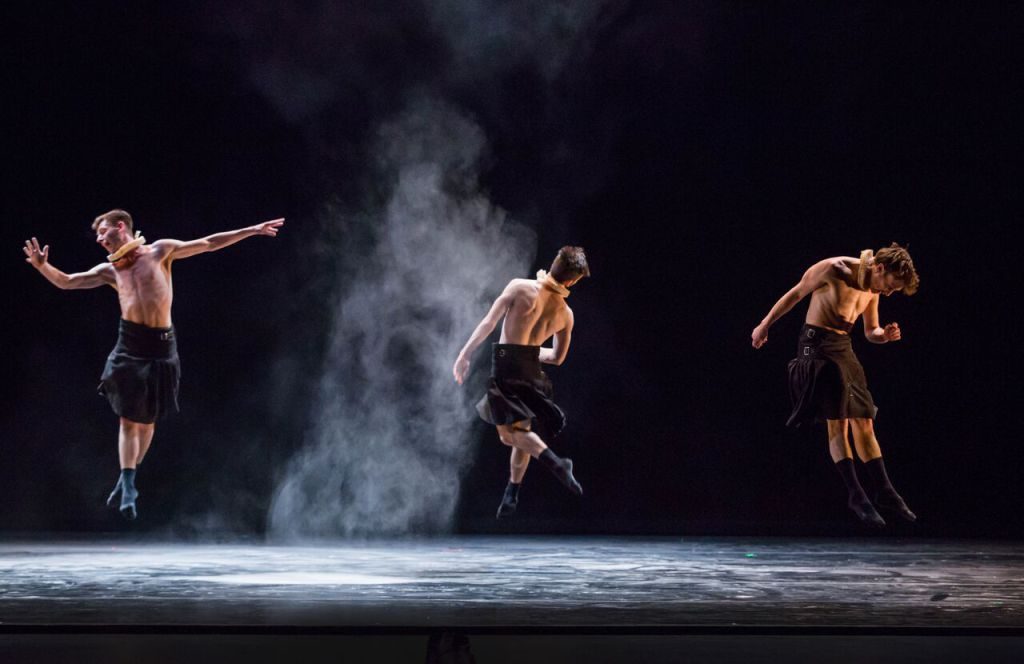 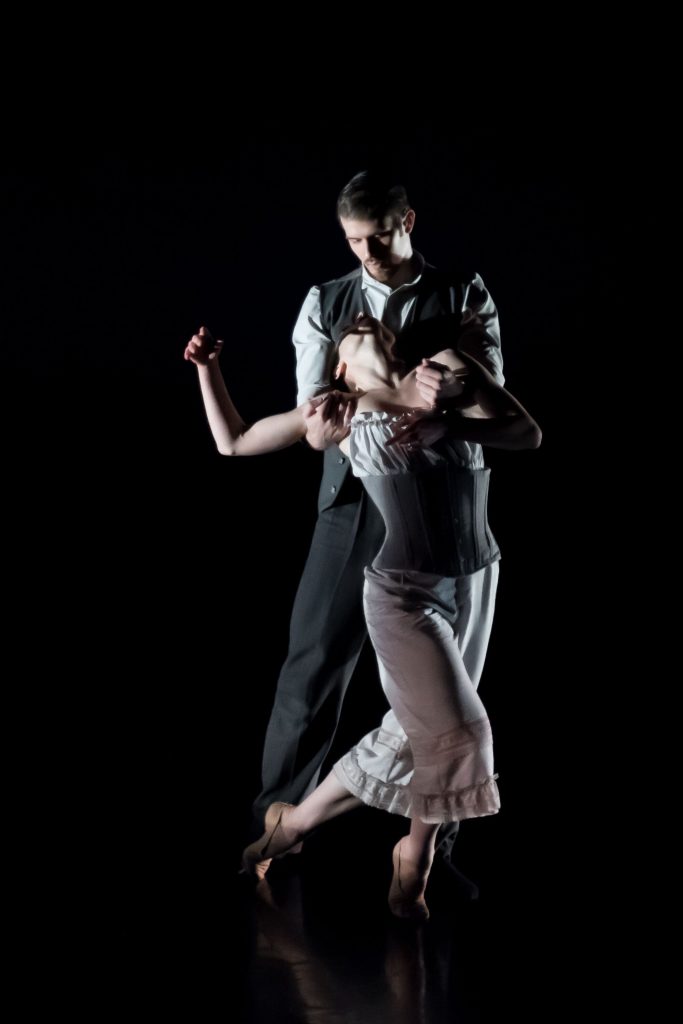 Donlon Dance Collective on tour:
“HEROES” and “THE LAST LIFEBOAT” 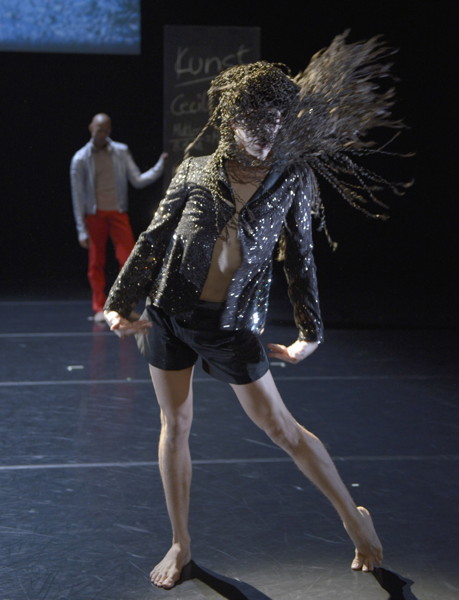 This is the story of my Grand Aunt Katherine Gilnagh who at the age of 16 survived the Titanic. She was the last passenger on the last life boat. This work in progress will show an excerpt of a dance solo we are working on using an interview from my Grand Aunt when she was 60, explaining what it was like…. she explains that at first she had no idea what was happening until the life boat was some distance away, it was then she heard explosions as the ships boilers hit the water and she started to see more and more bodies in the water.
The internationally acclaimed composer Dirk Haubrich has created an electronic music score to accompany an interview Katherine gave at the age of 60, recalling the night in question. 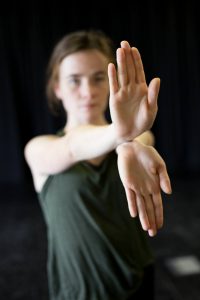 The ONE Grand Show 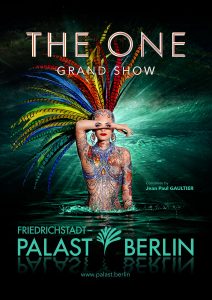 Homepage Friedrichstadtpalast
Trailer The ONE

Running for 2 years – THE ONE Grand Show to close on 5 July!

1,634 guests watched the show during the total of 491 performances staged between
September 2016 and July 2018.
Jean Paul Gaultier fulfilled a lifelong dream with THE ONE Grand Show: “My
creations have been brought to life in the most fantastical way.” Both the guests and the media were amazed by the poetic scenes and the style icon’s quirky costumes that will never be seen again in such splendour or dimensions. The international press were also impressed: the New York Times raved about “Gaultier’s fantastical imagination”, while the Guardian wrote of “an ecstatic and poetic dreamworld”.

“After a few warm-up revues in the last years, the Palast has now struck gold.
Its latest spectacle, The One, is an orgy of colour and style with costumes by French fashion icon Jean-Paul Gaultier. ‘It’s been such a fabulous experience, I just love it,’ said an ecstatic Mr Gaultier on opening night. ’As a boy I dreamed of designing a revue and now it has finally happened.’ […] And then the show explodes into life, with the ruined theatre now a location for a colourful underground rave-cum-fashion show. To thumping, catchy music by Daniel Behrens, a massive cast spreads out before the audience’s eyes like a Gaultier gourmet. Each a unique character, they are wearing outfits that run from drugged-up Disney villainesses to Village People tribute acts. […] Just as your eyes adjust to the opulence, each scene is succeeded by another, including dizzyingly inventive scenes by Berlin-based Irish choreographer Marguerite Donlon. A veteran of Germany’s dance world, who most recently worked in Moscow’s Bolshoi, she embraced The One to get a taste of the ‘Palast’ revolution from the inside. (Derek Scally, The Irish Times) 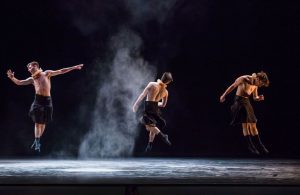 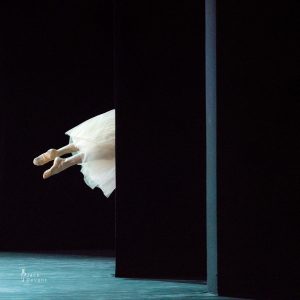 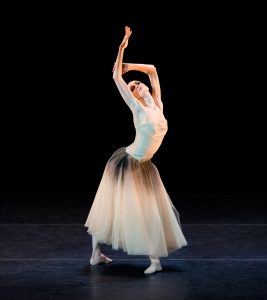 ‘This incontestable star of Bolshoi (without any taint of exaggeration) has the body, which may be possessed by one among ten millions of ballerinas” (Daily Telegraph)

“Svetlana Zakharova’s Odette may be the finest performance I’ve seen from her. Her adagio line is exquisitely fine-spun, yet there’s a weight in her arms, a wildness in the movements of her head that pitches this Swan Queen eloquently between human and bird.” (Guardian)

The three faces of Amore presented by the sublime Svetlana Zakharova in her brand new triple bill are passion, ambiguity and playfulness. She is joined on stage by top Bolshoi male artists, including Mikhail Lobukhin, Denis Rodkin and Denis Savin. Live music will be provided by the Orchestra of English National Opera under the direction of Pavel Sorokin.

The evening opens with Yuri Possokhov’s masterpiece Francesca da Rimini. Set to Tchaikovsky’s symphonic poem, it tells the story of the tragic lovers from Dante’s Inferno condemned to eternal punishment.

Rain before it falls, choreographed by Patrick de Bana is a ballet which concerns the struggle with the choice between darkness and light. It is set to classical sounds by Bach and Respighi decorated with modern electronic music tapestry by Pina-Quintana.

The third piece features Svetlana Zakharova supported by five male dancers. Set to Mozart’s Symphony No.40, Strokes Through the Tail is a humorous piece choreographed by Marguerite Donlon, providing the perfect ending to the evening. Part of the fun is costumes by fashion designer Igor Chapurin who also created the costumes for the unforgettable Francesca. 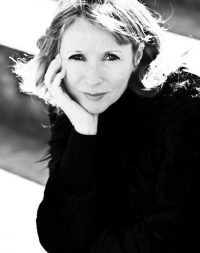 TO THE MOON AND BACK [Der Rest ist Tanz] 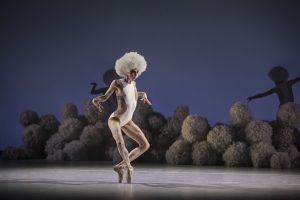 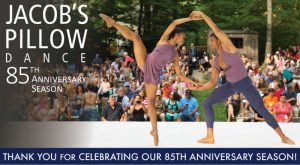 Brook Dance is an intensive training and development programme for vocational students and professional dancers early on in their career. Each year, the programme is overseen by a mentor who will work with the group.